CREDIT: This story was first seen in Tes

The cost of running Sats increased markedly in a year when the Department for Education introduced unpopular changes, Tes reports.
The government spent more than £44 million on the Sats system in 2016 – a  9 per cent rise on the previous year.
Information obtained by Tes also provides a breakdown of how the money was spent last year. The biggest single amount – £20.5 million – was spent on key stage 2 marking, a rise of 3 per cent on the previous year, according to a freedom of information response.
Changes to the way teachers assessed pupils’ writing last year prompted a spend of £538,000 – a rise of 46 per cent compared with 2015.
New Sats were introduced in 2016 to match the new “tougher” national curriculum – but the changes were condemned as chaotic and rushed.
The reading test left children in tears and Ofqual later published a report confirming that it had been“unduly hard”.
And the writing assessments were particularly unpopular, as children were required to pass every item before being judged to have met the expected standard.
This meant that a student who met all but one of the criteria and a student who failed them all would both be judged as being below the expected standard.
The concerns led to threats of a boycott from several unions, and the government said that writing assessments would not be used to judge schools in 2016.
The government has now proposed additional changes to the assessment system, including more flexible writing assessments in 2018.
Other plans include introducing a Reception baseline assessment – which could lead to the end of key stage 1 Sats in 2023 – and introducing a new times table check for Year 4 pupils in 2019-2020.
But Mary Bousted, joint general secretary of the National Education Union, said that more assessments will mean more money being shelled out.
“To seek to introduce two new costly assessments [the baseline and times tables check] at a time that schools are in the midst of a funding crisis would be a grave error,” she said. “The current assessment system does not represent value for money.
“The Sats fail to provide useful information to parents about how schools perform and do not tell teachers anything useful to support individual pupils in their learning. Furthermore, the high-stakes nature of primary testing puts unnecessary pressure on pupils and education professionals.”
The costs given to Tes [see the breakdown below] include some combined costs, such as: test development for both KS1 and KS2 tests (£1.1 million) and policy, research and support costs across all national tests (£5.5 million).
Similarly, staff costs, given as £10.8 million in 2016 – a rise of 20 per cent on 2015 – covered staff who will also be working in other areas, such as the professional skills tests for teachers, the FoI response explained.
The £44 million total included the KS2 science sampling test. This test is only taken every two years: it was taken in 2016 when £1.3 million was spent on it, but in 2015 – when it was not taken – the associated costs were £399,784.
Excluding the science test costs, the amount spent on Sats in 2016-17 was £42.7 million, up 7 per cent from the £39.8 million spent in 2015-16.
Regarding the science sampling test, Dr Bousted said: “The NEU believes that a better system should be introduced, based on sample testing and supported self-evaluation. Such a system would not only provide much richer information, but would also be significantly cheaper.
“This FoI [disclosure] demonstrates how much cheaper sampling assessment can be when compared to whole-cohort high-stakes testing.”
The Standards and Testing Agency’s (STA) FoI response stated: “Test delivery costs vary from year to year because of the number of pupils eligible to sit each test, and the design and length of each test paper, both of which influence production and collation costs for all tests, and the cost of marking for KS2.
“Development of a new teacher assessment framework took place in 2016 and a moderator standardisation process took place in 2017. The costs of these, as well as monitoring and moderating national curriculum tests and teacher assessment, are included in Test Operations – Teacher Assessment and Moderation.”
The agency spent £50.2 million in 2016-17 against a budget of £55.1 million, according to the agency’s annual report and accounts for 2016-17. The underspend was due to a reduction in “programme costs”.
STA staff costs increased by £600,000 during the year, “which was necessary to deliver our objectives,” the annual report states. A separate review into how the agency was run, published in 2016, found that the STA had a vacancy rate of about 15 per cent in the previous year. 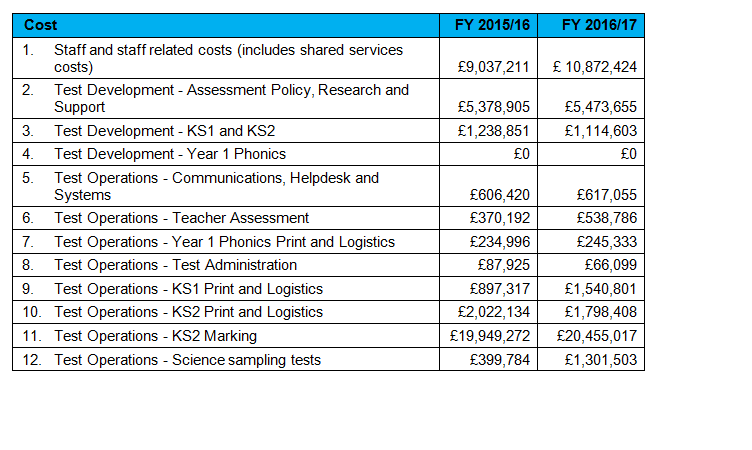