According to new research by Groupcall half of parents believe that schools are not being effective in providing positive feedback regarding their children. Lawrence Royston, managing director of Groupcall, looks at the research findings and highlights the areas that are the biggest cause for concern among schools

Schools go to a great deal of effort to keep parents engaged – with varying levels of success. What is useful to know is the perception of parents and how involved they feel with their child’s education. Recent research, conducted across the country, means that we can now analyse just how involved parents actually feel.

Both primary and secondary school parents were asked separately about how involved they feel in their child’s learning – with five stars representing high-engagement; the aim was to analyse age-related differences. 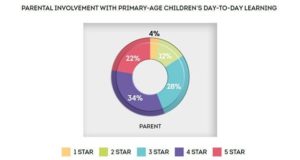 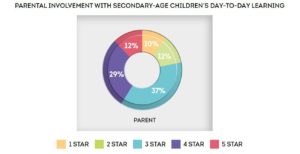 The survey showed that most parents seem to be happy with their involvement. A healthy 56% of primary and 41% of secondary parents express a high level of satisfaction and only a small minority seem genuinely unhappy.

Whilst it’s easy for schools to give themselves a pat on the back, it is worth taking a look at the dissatisfied group; 16% of primary and 22% of secondary parents do not feel involved with their children’s education on a day-to-day basis. It can be expected that the level of involvement drops off as a child matures but for one in six primary-aged children to not have parents involved is a troubling statistic to read.

Rather than settle for the top line about how engaged parents feel, it is valuable to dissect some of the different areas that parents felt they should be engaged in. One of these was the presentation of academic performance and whether schools are communicating enough about this.

There is a particular disparity between primary school leaders and parents, especially among those who don’t think there is enough information on academic performance being presented. However, for the most part, the parents surveyed are content.

For many parents, extra-curricular activities are a much more relatable area; parents may have had their own experiences and find this subject to be more accessible than the academic aspect. Both parents and senior leaders were asked about whether their children’s schools are providing enough information on extra-curricular activities, something which can help to indicate their own level of involvement with the school.

What should jump out on both graphs are the levels of the 5 star bars. With neither even reaching 20%, it is plain to see that parents believe a lot more needs to be done to communicate about extra-curricular activities. A sizable number of parents – over 10% for each phase – only score their school at 1 star, suggesting that there is little-to-no information on activities outside normal classes for children.

So how involved do parents feel about their child’s education? It seems that, for the most part, they are content. Whilst the shortcomings have been highlighted, the majority of parents in every section analysed scored 3 stars or above, suggesting that most of them are at least satisfied with their day-to-day engagement.

The question for schools to face is whether or not they are pleased to be occupying the middle ground. A worryingly large number of parents believe that more should be done regarding the communication of both academic achievement and extracurricular activities, and it is down to the schools to address this and ensure that parents feel more involved.