CREDIT: This story was first seen in the Independent

State schools students are performing better in their science A-levels than pupils at one of the country’s most expensive boarding schools, the Independent writes.

According to a new league table measuring schools on their science, technology, engineering and maths (STEM) expertise, boys from a number of free schools and grammars are more likely to do well than their peers at Eton College.

Reading School, King Edward VI Camp Hill School for Boys, and Sutton Grammar in Surrey have all been awarded top places in the Your Life league table, a government-backed campaign to promote science skills in school leavers.

A number of new specialist free schools – state schools run independently of local authority – are also proving to be performing well when partnered with universities.

King’s College London Mathematics School, which opened in 2014, comes top of the new table despite only making 24th place in traditional A-level rankings.

Eton College, which charges fees of more than £32,000 per year, appeared less favourably, however.

The elite boys’ boarding school – whose famous alumni include politicians and royals – was ranked 109th for STEM skills.

Edwina Dunn, chairwoman of Your Life and chief executive of Starcount, which compiled the data,  said the general league tables rewarded schools for grades rather than subjects, but modern rankings needed to measure how desirable pupils are for businesses and jobs. 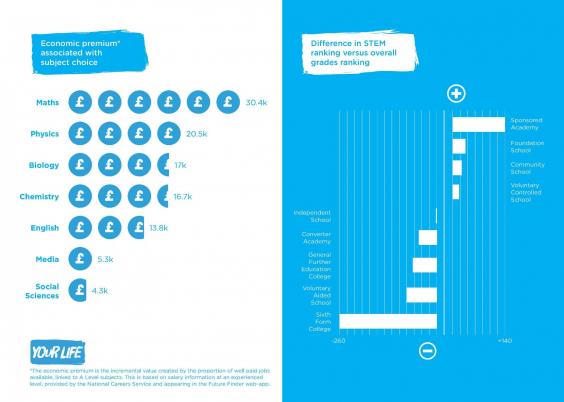 “The challenge of Brexit is upon us and the clock is ticking if we want to have the workforce we need to compete in the world,” she said.

“School performance measurements should more closely reflect the skill requirements of the UK economy and reward subject expertise in the most demand skills areas.”

The group has called for a “rethink” of how schools are assessed to give greater weight to the subjects that open up the most career prospects.

“There are schools up and down the country that are doing a great job in preparing their pupils for the job market today and in the future.”

In 2011, around one fifth of the UK workforce was employed in science-based roles, equating to 5.8 million people.

This number is expected to rise to 7.1 million by the year 2030, placing increasing pressure on the younger generation to leave school equipped with STEM skills.

Launching an All Party Parliamentary Group enquiry earlier this year into how well schools prepare pupils for careers, cross-party MPs urged for the STEM skills gap to be addressed in light of the current global climate.

“Technological and business advances are made at an accelerated rate [and] young people must be provided with the ability to upskill and retrain to move fluidly between career sectors,” said the group’s chair, MP Danny Kinahan.

“If we fail to adequately prepare new generations for this shift, we risk stifling the entrepreneurial spirit and ambition that makes Britain internationally competitive and culturally vibrant.”

She told The Times: “In a school where well over 60 per cent of sixth formers take Stem subjects and where we are investing heavily in computing, robotics and technology, we believe the future for Stem at LEH is fantastic.”

Eton College has been contacted for a response.